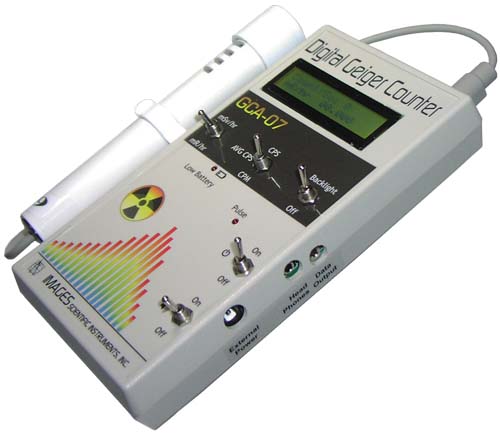 This is a complex question. The GCA-07W can detect alpha, beta, x-ray and gamma radiation.

In the case of testing for alpha and beta radiation mentioned before, a lab might incinerate the food or fish in question down to ash. Without the water blocking radiation it becomes easier to test the material for beta and alpha contamination.
On the Images website we have a number of nuclear experiments and articles. We have an article on testing food for radioactive contamination that goes into greater detail than I can here.

I hope this information helps.

The GCA-07W is sensitive to x-ray radiation, so you can detect and log x-ray radiation. There is free Geiger graphing software available on the Images Co website.
https://www.imagesco.com/geiger/geiger-graph.html
Or you can purchase the full version on Amazon.Com
Geiger Counter Graphing Software for PC with USB to 3.5 mm TTL cable for GCA-07, GCA-06 and GCA-03 series of Digital Geiger Counters and other compatible Geiger counters with a TTL serial data output.
Keep in mind the GCA-07W is calibrated using a CS-137, so the best accuracy is obtained when detecting and measuring radiation from that radiation source.

Yes. The GCA-07W digital Geiger counter can detect and measure alpha, beta, x-ray and gamma radiation. Spec are as follows:
. Detector Sensitivity
. Alpha above 3.0 MeV
. Beta above 50 KeV
. x-ray and Gamma above 7 KeV

The CT scanner uses x-rays which are detectable by the GCA-07W. If the scanner is leaking x-radiation you ought to be able to detect the leakage using the GCA-07W.

The GCA-07W is assembled and built in the United States.

This uses a standard style GM tube. A pancake style wand is schedule for release in 2017

No there is no scintillator detector option for the GCA-07W.

First alpha particles only travel a few inches in open air. So unless you are measuring a radioactive source within a few inches of the sensor, you are not detecting alpha radiation. The uranium ore samples we sell emit a high percentage of alpha particles that may be blocked with a sheet of paper.

The second question I think you are asking is how to separate out background radiation from a radiation reading. What I would do is take an hour's worth (60) of one minute readings. This is the CPM (counts per minute) mode on the GCA-07W. With this data collected. I would add the 60 readings together. I would then take that total and divide it by 60 to get an average CPM reading. Next I would look through the 60 CPM readings and mark down the highest count CPM reading, and the lowest count CPM reading. Those two CPM numbers are your Max and Min. With this information you take a radiation reading off an object. You can first determine if the radiation reading(s) are greater than you MAX CPM number. If the readings are consistently greater, you can make a logical assumption that there is an increase in radiation due to the object you are testing.

In some cases you would also subtract the average CPM number from your reading to see what the increase in radiation is on average. Much depends upon what you are actually attempting to do and read.

You could also average a much larger number than 60 samples to obtain the average CPM, Min CPM and Max CPM. In general the greater the number of samples the greater the level of confidence.

Yes, you can purchase a replacement wand from the manufacturer. However, each wand and Geiger counter are tuned together to obtain a high degree of accuracy. By just replacing the wand you will get a functional Geiger Counter. To obtain the accuracy of the instrument you will need to return the unit to Images SI Inc., and have the wand factory calibrated to the instrument. Factory calibrations are $35.00.

This Geiger counter may be used in those applications. The advantages of our GCA-07W is that it may be NRC certified to its accuracy. While many Geiger counter manufacturers claim high accuracy for their Geiger counter, it simply is not true. Fortunately the United States Government has a license standard for Geiger Counter accuracy. This is a Nuclear Regulatory Commission (NRC) certification for accuracy. NRC certification can only be performed by a nuclear laboratory licensed by the United States Government to perform such certifications. Without this certification, you can not be sure of any claim that a Geiger Counter accuracy is valid. The Geiger Counter itself has a one-year warranty for manufacturing defects. The GM tube in the wand however is not covered by the warranty. The mica window on the front of the GM tube that allows the Geiger Counter to detect alpha radiation is very delicate and if mishandled will break.

Yes. The serial CPS data is sent out, once every second, as a two byte number (most significant byte first) with the following specifications: 9600 Baud, Inverted, 8 data bits, no parity and one stop bit.
Count Per Second (CPS) = (High Byte * 256) + Low Byte.
The raw serial signal from the Geiger counter is TTL logic +5V and 0V.

Yes. Deplete Uranium (DU) is slightly radioactive and according to the spec sheets I've read emit mostly alpha particles. The GCA-07W can detect radioactivity over background radiation. Although DU is not available to either test or make measurements.

No. You are purchasing a single Geiger counter with wand, no accessories are included.
By Images SI Inc

It comes with base unit, wand, connecting wire, instruction manual, CD and ethernet cable. I can not remember if it comes with batteries and recharger or if we put in off the shelf batteries. Either way I had it up and running in 15 minutes. The only draw back to it is that if you want a counts per minute, you have to wait a full minute. More fancy units that a scrap yard would use to scan shipment can sample in a few seconds and scale to full minute. But for a few hundred dollars, it did what we needed it to do.
By Dustin L. Sullivan

Yes, I used it to monitor the air for cs-137 overnight from the window silt. I worked very well.
Amazon Customer

Sort of. If a device is calibrated by a certified technician it is certified for commercial use.
By James Woodiwiss.

The NRC requires that our Geiger counters be certified yearly by a company that is licensed to do so, at that time accuracy and if needed calibration is done. http://www.imagesco.com/geiger/certification.html This website has a good explantation.
By Nancy L..