Over the years many UFO sightings have reported magnetic and electromagnetic disturbances. The UFO Detector is designed to sense these disturbances and will signal their presence by flashing an LED and beeping. 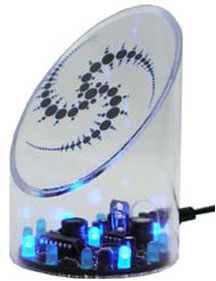 Do UFO's; Unidentified Flying Objects exist? Of course they exist! UFO sightings are reported all over the globe by thousands of people. The real question is whether UFO's are interstellar vehicles visiting Earth? Most UFO sightings can be classified as misidentified aircraft, planets or other aerial phenomena, but not all of them. There is that small percentage of UFO reports that can't be explained by any known aircraft or natural phenomena. It is these reports that create an exciting possibility.

Granted these possibilities attract fringe personalities and hucksters that ought not be taken seriously. But one should not discount the entire subject of UFO's based upon the psycho-ramblings of a few individuals or groups. UFO enthusiasts know the odds are stacked against them regarding credibility.

UFO's can be debated intelligently on both sides of the fence. This article will not enter the debate. But if UFO's has ever aroused your curiosity you may be interested in building a UFO Detector from one of the kits we offer in multiple color options, see figures 1. Figure 1 is our UFO-02A. Our kits include all components needed to build the circuit, housing sold separately.