Turn your iPhone into a sensitive UFO Detector.

Put next to your bed for all night UFO monitoring.

Great for camping trips and outdoors.

Click iPhone icon to the left to go to Apple App store to purchase. 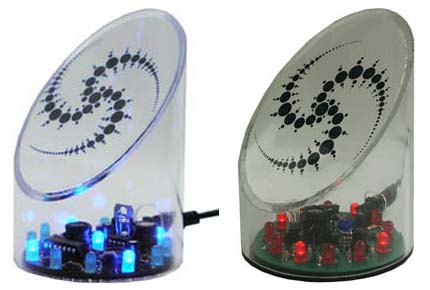 The UFO detector continually monitors its surrounding area for any magnetic and electromagnetic anomalies.

The UFO detector is a magnetometer interfaced to a PIC microcontroller for detecting magnetic anomalies.

Over the years real UFO sightings have reported simultaneous electromagnetic disturbances. The UFO Detector is designed to sense these electromagnetic disturbances and signal their detection. The UFO Detector kit contains 13 LED lights that light in a circular sequence while the unit is in detection mode. When an anomaly is detected, all LED lights flash and the unit makes a beeping sound.

The elegantly designed transparent plastic case is a handsome sculptured conversation piece that allows one to see the electronics inside the case. Suitable for display on a desk, shelf or bedroom dresser. Size is approximately 3" dia. by 4" tall. Uses a 6-9V wall transformer (included).