The PSI Science is an nuclear radioactive based dependent device that can be use to check ESP / PSI, and the minds ability to influence machines and random events at the atomic energy level. The PSI Science lamp incorporates a Random Number Generator (RNG).

The RNGs output is connected to four different colored LEDs. Depending upon the random number generated, one of the four colored LEDs is lit. While this set up might appear trivial, it can be used to accurately test for different aspects of ESP.

However, in our case, as will be explained in greater detail later, a random event which is the detection of background radiation, triggers the generation a random number.

When I designed the first RNG circuit around a geiger counter I had thought it original to me. My company has turned this circuit into a small commercial product called the ESP Lamp-02. A series of events cause me to look to see if a RNG had ever been connect to four different color lights to test for PSI and PK.

Searching through the Internet I found that connecting a "Geiger counter" RNG, to a modulo four selector to four different color lights for the expressed purpose of testing PSI and PK had been done in the 1960's by Helmut Schmidt. See photograph above. (Photograph courtsey of Helmut Schmidt) So, not only had my circuit been created before, but in almost the exact same manner. His experiments with the RNG connected to four colored lights, concluded that the human mind can influence the RNG output to produce statistical deviations from chance.

Helmut Schmidt, during this time was a physicist for the Boeing Company Laboratory. He created a number of RNG used for mind-over-machine experiments in 1960's and 1970's. He was the first to use electronic RNG and REG in PSI experiments. 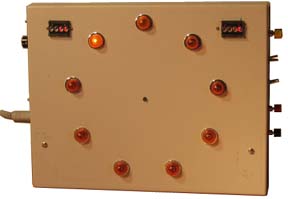 In one experiment Schmidt linked the output of his RNG to a box with 9 lights on it arranged in a circle. See photography to right. (Photograph courtsey Helmut Schmidt) Just one lamp would be lit at a time. Depending upon the state of the RNG the lighted lamp would appear to move in either a clockwise (CW) or counter clockwise (CCW) direction. Under normal circumstances the light would drift in one direction or the other. If measured over time, these movements were statistically neutral.

The Amazing Kreskin, offered a electronic ESP tester through Edmund Scientific in 1975. This ESP tester used a RNG to lit one of four different colored LEDs.


As Kreskin explained the device; "Understand the test machine was simple, but at the same time rather ingenious. It had 4 target areas which had lights under them. You saw a triangle, an arrow, 4 hearts in front of a square, and a heart. What was possible was by pressing a button, the order of these items and the order in which they came up, one at a time or all at once, varied. The bottom line is that one could try to predict in which order they would come up, or if a person was holding it and shielding it from another person, as the button was pressed the other person would try to guess which targets would appear first, second, third, fourth, and so forth. It really was a way of shuffling 4 possible targets so that there was a randomness of the order in which they appeared. And, therefore, it became a situation of guessing, either intuitively or telepathically, the results. By keeping score on how successful individuals were over a number of runs, one could then decide if the hits or successes were above chance, then it was possibly indicating a potential paranormal ability."

Precognition: Testing for precognition is simple. Predict the color of the LED that will light next and track the results. For example, write down what you think the color sequence of the next sixty LED colors from the ESP lamp will be. Chance for guessing the right color LED is one out of four (p=1/4). So chance alone will provide an average of fifteen correct hits out of sixty calls. However, any number of hits within the range of 9 to 21 hits is NOT considered significant, because this range is within two standard deviations from chance. But any number of hits above and below this range is significant and is considered showing ESP/PSI activity.

Psychokinesis (PK): Another challenge, to use your mind to influence and output from the PSI Science lamp; either greater or lesser than chance. Choose a single color (or number) to intend. As you try to influence the output of the ESP Lamp, write down the next sixty LED colors. Anything above and below the range 9 to 21 range shows is statistically significant. It had been observed that groups of people all intending the same color or number have a higher success rate than individuals. This could be a game to try at your next party.

Telepathy: Two people in separate rooms, one is a sender the other a receiver. The sender observes the PSI Science lamp, and tries to transmit the color changes when they occur, to the receiver. The receiver tries to receive the impression from the transmitter and logs colors and/or times.

Fortune Telling -- Telephone To God: in this application, the lamp becomes a sophisticated magic 8-ball type of device. You ask a question and wait for the reply which is answered with the next lit LED. You can assign your own answers to the colors, for example, green for yes, red for no, yellow for unclear, blue for ask again. One the surface, a Telephone To God, sounds too unbelievable to be true. Einstein is quoted as saying God does not play dice with the universe. To which Neils Bohr replied, Einstein, stop telling God what to do with his dice." Let me leave you with this quote from - Matthew 10:29. Not even a sparrow falls to earth without Gods knowing it.

Mood Lamp: the changing LED color output of the PSI Science lamp is unpredictable both in time and color. You can look at it as a sophisticated mood lamp, or the ramblings of the universe at large or maybe an example of God talking but no one is listening.

Radioactive Fallout Detector: Since the PSI Science lamp-02 has a built in Geiger counter, excessive radiation, from say radioactive fallout, would cause the LEDs to blink rapidly. Using this same principle, if someone needed to generate random numbers more rapidly that the lamp typically outputs from background radiation, you could hold a small piece of radioactive uranium ore by the lamp, close to the side where the GM tube lies. This will also cause the lamps LEDs to blink rapidly and output significantly more random numbers.