It’s easy to be cynical about the PSI Science lamp and minimize the significance of what it represents. Other scientists whom employed rigorous methodology and authored peer-reviewed materials have drawn conclusive results, that keenly suggest ESP/PSI abilities of the human mind based upon the statistical anomalies encountered using Random Event Generators (REG). Here are three search terms for you to look up on the internet; Helmut Schmidt, PEAR, Dean Radin (IONs) and Global Consciousness Project.

These searches will generate a wealth of information based on science and will form the solid foundations of this cutting edge research. 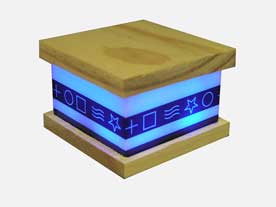 Helmut Schmidt we already touched upon in the history section.

Dean Radin, PhD, is the Senior Scientist at the Institute of Noetic Sciences (IONS). He has written extensively on PSI phenomena and experiments, far more eloquently than I have. His books The Conscious Universe and Entangled Minds are pivotal, interesting and eye opening.

PEAR is an acronym for the Princeton Engineering Anomalies Research. The mind over machine phenomena was research extensively by PEAR led by Robert G. Jahn. This interpret group of people studied the mind influencing the behavior of machines, and proved a positive undeniable correlation.


Hardware and Software for the ESP Lamp

Images SI Inc. is planning a hardware adaptor with software to read the output of the RNG/REG to test ESP / PSI detail using a PC. Another possibility is to monitor the output to determine if the REG output ever becomes less random, thereby signaling an event (maybe global or local).

To generate random events, our ESP lamp relies on the immutable randomness of radioactivity. Quantum mechanics states that the nuclear decay of atoms, are fundamentally random and cannot be predicted. Our device has a mini-Geiger counter that detects background radiation consists of three main sources: cosmic, terrestrial, and internal. Cosmic radiation comes from the sun and stars. Terrestrial radiation comes from low levels of uranium, thorium, and their decay products in the soil, air and water. Internal radiation comes from radioactive potassium-40, carbon-14, lead-210, and other isotopes found inside our bodies.

So the detection of a radioactive particle is a random event, making the built-in geiger counter and monitoring microcontroller a REG. This random event is used to produce a random number.

How Random Numbers are Generated from Background Radiation:

Okay, so random numbers are generated by the random event of detecting a radioactive particle, but how? The way the random number generator operates is best described by first using a mechanical analogy. Imagine if you will the sequence of numbers one to four painted on the edge of a revolving carnival wheel. There is a pointer at the top that indicates the number at the top of the wheel. The wheel is set into motion, spinning very rapidly, thousands of revolutions per second. Then at any given “random” moment in time the wheel is instantly stopped, and the number indicated under the pointer becomes our random number. Once the number is read, the wheel is set back into motion.

The microcontroller program follows pretty close to the mechanically analog. The microcontroller spins the sequence of numbers in a byte sized variable. The numbers one through two-hundred and fifty six are ran through in a loop over 800 times a second. The random event; detection of a radioactive particule, stops the count inside loop, and the current number in the loop is read, displayed via the ESP Lamp's LEDs and sent out serially on the TTL port. Then the program reenters the loop and begins counting again.

Background radiation is an ideal quantum trigger for the RNG because it is impossible to predict with any accuracy the exact moment a radioactive particle will be detected.