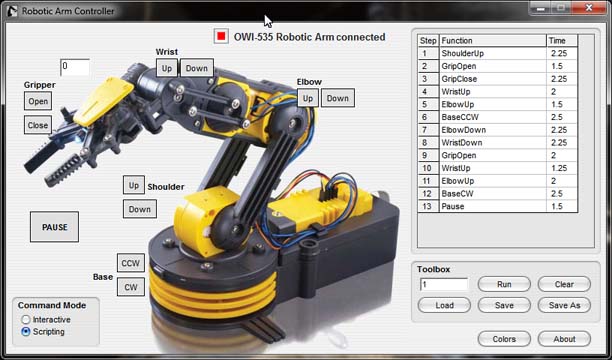 Robotic Arm Moves without a command being issued:
Sometimes when the PIC microcontroller may start up with a random number in its USB port, that could cause erratic behavior. If the robotic arm is moving and doesn’t respond to the Pause command, turn off the power to the USB board. Touch the transistors on the PC board. If the transistors on the board are hot or overheated keep the board turned off until they cool down. Turn on the USB board and issue a pause command from the windows software.

Writing Script Files:
To write script files, click on the button labeled "Interactive". The button name changes to "Program". This lets you know you are in the "programming" or script writing mode. Any function clicked on now will be written into a script file. When you click on a function, the robotic arm performs the function like in the interactive mode, but in addition information on the function is written into the yellow script file box on the right hand side of the screen. The function name is written and it is given a step number. When the function button is clicked for the second time it stops the function, the time elapse between button clicks is entered into the third column. Instead of clicking the same function button a second time a user may also click onto a new function. This will stop the first function, write the time elapse into the 3rd column as before and immediate write and start performing the new function. A user may program up to 99 functions, including timed pauses, into a single script file.
To stop writing a script file click on the button labeled "Program". The button name changes back to "Interactive", letting you know you are back in the interactive mode. Script files may be saved and loaded to the local directory.