The ability of our microcontroller to read the electrical status of its pin(s) allows the microcontroller to see the outside world. The line (pin) status may represent a switch, sensor, or electrical information from another circuit or computer. And as we'll see later can read an analog voltage on a pin using the 16F88 microcontroller's built in Analog/Digital (A/D) converter.

Lets take another look at the switch schematic in figure 4 before we start using the switch in a program to visualize how the switches affect the I/O pin electrically.

In place of a switch, we can substitute an electrical signal, high or low, that can also be read usig the Button command.

Typically checking the switch status is accomplished inside a program loop, where the program is looking for a change of state (switch closure). When the state of the I/O pin (line) matches the state defined in the commandr, the program execution jumps out of the loop to the "Label" portion of the program.

We can use standard PBP commands to read the status. Let's say our switches are connect to RB0. In the case of the A switch, the line is normally high (binary 1), so to detect a switch press we want to see a binary "0".

In the program snippet above, the line "if portb.0 = 0 then goto routine2" checks the status of pin RB.0. In the case where RB0 = 1 the routine jumps back to start and keeps re-checking the statud until it changes. The program can be easily modified to check for a binary "1", for the use with switch B, see below.

Now its time to use a momentary contact button to our application. By adding a switch we can have the program stop or start at the press of a button. The image below is a minature momentary contact push button switch Normally Open (N.O.)

This particular momentary contact switch has terminals that are for soldering directly to a pc board, but also plug right into our solderless bread board making connection into our circuit easy.

For this example we will have the program stop counting while the switch is pressed and resume where it left off when the switch is released. The first thing we need to do is add our switch to the circuit. The schematic follows. 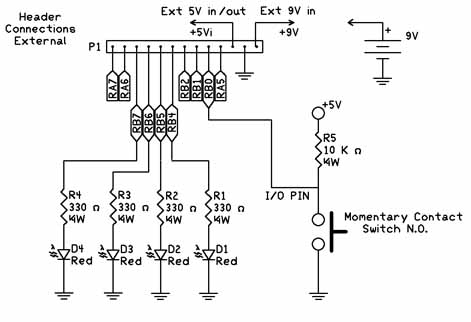 
As the name implies the Button command is made to read the status of an electrical "button" switch connected to a Port pin. We can use the same two basic switch schematics, labeled A and B, connected to a I/O pin. The Button Command structure is as follows:

The next program is similar to the previous program, in as much that it performs a binary counting and stops when the button is depressed. This program uses the button command.

The program contains two loops as before, the first loop counts to 15 and the current number's binary equivalent is reflected by the lit LED's connected to port B. The loop continues to count as long as the switch SW1 remains open.

When SW1 is closed the Button command stays inside a smaller internal non-counting loop "lp" where the program remains until the switch SW1 is re-opened. You can switch back and forth between counting and non-counting states.

We use the same scehematic as before.


When the program is ran, it begins counting. When the switch is closed all the LEDs will turn off and it stops counting. Open the switch and the counting resumes starting from where it stopped.