If you thought that nitinol material would make an excellent material to construct heat engines you are not alone. Over the years a number of experimenters and companies have created nitinol heat engines. A patent search on the Internet using the key words nitinol and engine turned up several heat engine designs. Most of the patented designs are mechanically complex and don't lend themselves easily for quick experimentation. However, there is a simple heat engine design that found its way into a few toys. Let's take a quick look at this design.

The Thermobile (see figure 8), uses a loop of nitinol wire to generate power. The nitinol loop is place on two free rotating wheels, This device uses only hot water (hot side) and cool ambient air (cool side). The smaller brass wheel of the Thermobile is immersed in a hot liquid.

In short, the temperature differential causes one side of the loop to stiffen (hot water side) while on the air side of the loop the nitinol cools and relaxes. A mechanical force is produced that causes the wheel pulleys to rotate.

In some cases it is necessary to jump start the engine by rotating the larger wheel. Interestingly, the Thermobile hasn't a set rotational direction. Whichever way it is started it will continue to rotate. The Thermobile can also be solar powered. A magnifying lens focusing sunlight on the brass wheel also supplies sufficient heat to power the engine.

Larger Thermobile engines have been built and tested using nitinol loops. One engine built by Innovative Technologies International (ITI) in 1982, contained 30 nitinol wire loops. The nitinol wire used in the loops was 22 mils in diameter. The engine was tested using a hot water bath set at 55 C and an air temperature of 25 C. The engine reached a speed of 270 RPM and continued to operate for 1.5 years without failure. The nitinol wire had undergone 2.1x108 cycles without any breakage or observable degradation in performance. 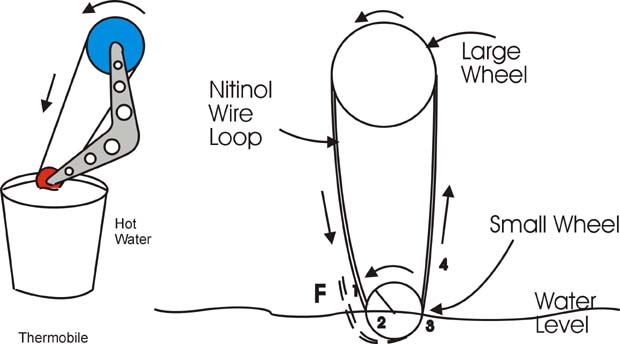 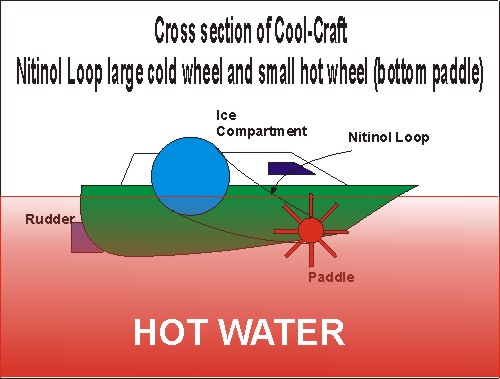 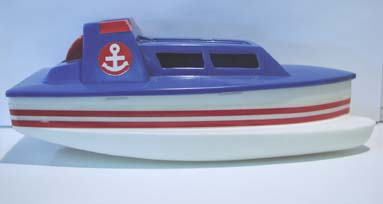 
The Heat Engineis a very special kind of heat engine that demonstrates the conversion of heat energy into mechanical energy. Based upon the work of Dr. Alfred Johnson who was granted a patent on this type of heat engine in 1977 patent # 4,055,955.

It uses the unique property of Nitinol alloy to generate mechanical motion from heat. Nitinol has trained into a shape at high temperature (about 600° C) and allowed to cool to room temperature, where it can be easily deformed and welded into a loop.

When heated above a transition temperature (in this application about 50° C to 70° C) the Nitinol object abruptly returns to its high-temperature shape with a substantial force that is able to drive the pulleys and thus create motion. See the Heat Engine in action!