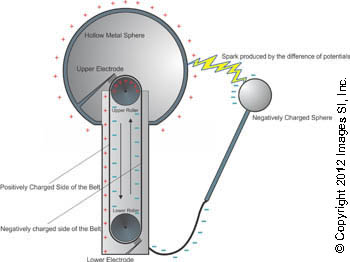 Van De Graaff generators are a common sight in many science laboratories and for many people it is a device that looks like a large metal ball on a pedestal and can make hair stand on its end literally. However, there is more to the Van De Graff generators than just deploying static charge.

The Van De Graaff Generator is basically an electrostatic machine that can generate high voltages. A typical Van De Graaff Generator consists of an insulating belt that transports electrical charge to a terminal. The charges that are sent on the belt are generated through a high voltage DC supply. These charges are collected in the inside of the terminal and transferred to its external surface.

A Van De Graaff generator can be used to generator high amounts of potential difference to the order of about 5 Mega Volts. Generally used for scientific experiments, the generated charges are used to speed particles such as ions. Let us now take a detailed look into the history, construction and working of Van De Graaff Generators.

The first Van de Graff Generator was invented by Dr. Robert J Van De Graff in 1931 in the Unites States of America (USA) for the sole purpose of generating and using high voltages for use in nuclear physics experiments. Dr. Robert J Van De Graff, a professor in the reputed Massachusetts Institute of Technology in USA, designed and built the world's largest air-insulated Van de Graaff generator for use in X-ray experiments and for research in atom-smashing. Later on, as different methods to accelerate atoms became available, the original Van De Graaff generator became used for academic and instructional purposes.

The largest Van De Graff Generator was constructed in an unused dock in South Dartmouth, Massachusetts. It was constructed on railroad tracks for easier mobility and access. The two colossal domes were connected via a tube. Each of the two domes had a laboratory where scientists were able to carry out experiments and study the effects of large amounts of electricity on particles in the connecting tube.


How does a Van De Graff Generator Work?

The Van De Graaff generator works simply on the principle of static electricity. All matter, as we know is made up of atoms which further constituted of electrons, neutrons and protons. Electrons carry negative charge whereas protons are considered to be positively charged. When the number of electrons and protons remain the same, the matter is considered to be neutral in charge. A negatively charged matter has more number of electrons than protons while the opposite holds true for a positively charged matter. Electrons can flow from one matter to another.

When two materials are rubbed together, a flow of electrons can take place depending on the triboelectric properties. When such a transfer occurs, the material that lost electrons will become positively charged and the one that gained electrons becomes negatively charged. This basically how static electricity is generated.

The motor is required to turn the belt at a constant speed around the two rollers. The lower roller is built of a material that has a stronger triboelectric property. Now when the motor starts turning the belt around the lower roller, electrons are captured from the insulated belt onto the lower roller. Slowly more and more charge becomes concentrated on the roller. This phenomenon of concentration of charge results in repelling the electrons from the tips of the brush assembly. It also starts to attract electrons from the air molecules between the lower roller and brush assembly. Due to this phenomenon, the positively charged air molecules get carried on the belt away from the negatively charged roller. The belt therefore gets charged positively and moves towards the upper rollers.

The upper roller is made from or coated with a material that is higher up in the triboelectric series such as nylon due to which it tries to repel the positive charge on the belt. The upper brush is directly connected to the inside of the output terminal or sphere at one end and almost touches the upper roller and belt at the other. The electrons in the brush become attracted to the positive charges on the belt. The air particles break down too and the free electrons move towards the belt. The sphere takes up all of the charge and the excess charge gets spread to the outside of the terminal output or sphere.

It is this simple electrostatic effect that allows the Van De Graaff generator to output very high voltages continuously.