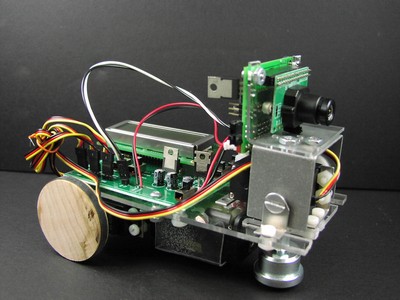 The C-Bot uses the artificial vision camera developed at the Carnegie Mellon University (CMU) to build a mobile object-tracking and following robot. The CMU camera, see figure 1, captures a target placed in front of its lens. Our PIC microcontroller interrogates the camera to find the position of the target within the camera’s Field Of View (FOV). Using this information we can determine movement in the horizontally and vertically axis and if our target moves away or get closer to the camera as well. The PIC microcontroller uses this target position information to activate the servomotors to move the mobile robot to faithfully follow the target. If the target object gets too close the robot will back away. If the target object moves away, the robot follows it, up or down, the robot has an up-down servomotor connected to the camera to follow vertical movement.

If you would like an introduction into the world of artificial vision system you will have a good starting point here. The heart of the project is the CMU camera itself. It comes with a complete manual. Some of its features are:

Our C-Bot does not use all of the features available on the CMU camera, however the Windows software bundled with the C-Bot kit will allow you to investigate more CMU camera functions than is possible with the C-Bot using the PC. If you are building the C-Bot from scratch the PC software is available separately. I will touch upon that software later.