How to read a Geiger Counter

The Geiger counter measures the radiation levels in different ways. Analog meters can provide a reading in Counts Per Minute (CPM) and their equivalent Radiation Level. For example lets look at the meter face to a common analog Geiger counter, see figure 12. 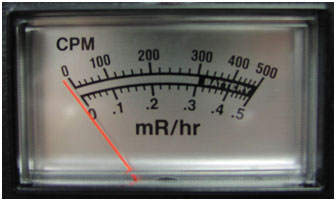 At its most sensitive scale a count of 500 CPM is equivalent to a radiation level of 0.5 mR/hr. This model Geiger counter has a 10X and 100X switch to select ranges from 0.5 mR/hr to 5 mR/hr and 50 mR/hr respectively.

Digital Geiger Counters have a digital display. The digital display has a number of advantages, such as providing an accurate and exact count of the detected radioactive particles in either the CPS or CPM measurement and their equivalent radiation level. The analog display approximates the number of clicks per minute.

Figure 13 shows a digital display from a GCA-07, the Counts Per Second (CPS) on the top line of the LCD. The second line shows the equivalent radiation level. This second line's equivalent radiation level is a running three second average. This three second average smooths out the reading so it's not jumping every second in response to the changes in the CPS.

The digital display also allows you to change from Imperial measurements (mR/hr) to Metric measurements (mSv/hr) with a flip of a switch. Figure 14 shows a digital display from a GCA-07, the Counts Per Second (CPS) on the top line of the LCD as before. The second line shows the equivalent radiation level using metric measurements of mSv/hr. This second line's equivalent radiation level is also a running three second average, as explained before.

When switching to the CPM mode the digital screen changes, see figure 15.

The first LCD line shows the running timer. The timer starts at 0 seconds and counts to 60 seconds (one minute). Next to the elapsed time on the first line is the accumulated count of radioactive particles detected. The timer continues to count radioactive detections until a full minute (60 seconds) has passed. At the point the display pauses for one-second to show the complete count for the minute and its relative radiation level before resetting the timer and accumulated count to zero and starting to count for the next minute.

The second line shows will continue to show radiation level until it updates again at the end of the minute.