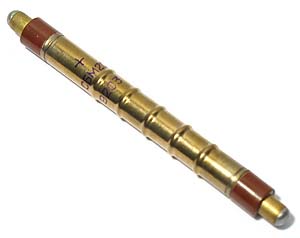 Inexpensive GM tubes like the SBM-20 Russian Geiger counter tube shown to the right, only detect beta, x-ray and gamma radiation. So if your Geiger counter uses one of these styles GM tubes it is blind to all alpha particle radiation.

More expensive GM tubes, like the LND-712 Geiger Counter tube shown to the left have a thin mica window that allows alpha particle radiation to penetrate into the interior of the GM tube and ionize the gas for detection. It is generally more fragile than the beta-gamma GM tubes because of the thin mica window. The mica window allows one to detect the alpha radiation from radium and polonium. This type of Geiger counter may also be used for prospecting, experiments, and general field work. In addition, it can measure total radiation from materials including alpha radiation. Most laboratory grade Geiger counters use this style tube.

The common thread connecting the types of radiation these geiger counter tubes detect is that the radiation are all ionizing radiation. Meaning they are capable of ionizing the gas atoms inside a GM Tube which allows for their detection, as explained on page 1.