Read our online article: Buying a Geiger Counter, what best suits your needs

Geiger counters are instruments that can detect and measure radioactivity. They do so using a Geiger Mueller (GM) tube. The original design of the GM tube by H. Geiger and E.W. Mueller in 1928 hasn’t changed very much. Radiation, as it passes through the GM tube, ionizes the gas within the tube. This ionization, create a momentary conductive path between the wire at the center of the tube (Anode) and the wall of the tube (Cathode), see figure 1. The momentary conductive path creates a electrical pulse that results in a ‘click’ sound. This conductive path is quickly quenched by the halogen gas inside the GM tube. By measuring the number of the clicks, the instrument indicates the radiation levels.

A cut away drawing of a typical Geiger Mueller (GM) tube is shown in Figure 2. The wall of the GM tube is a thin metal (cathode) cylinder surrounding a center electrode (anode). The metal wall of the GM tube serves as the cathode of the GM Tube. The front of the tube is a thin Mica window sealed to the metal cylinder. The thin mica window allows the passage and detection of the weak penetrating alpha particles. The GM tube is first evacuated then filled with Neon, Argon plus Halogen gas.

That pulse is a count and is read by the user through a visual readout in the form of a traditional analog meter, or an electronic LCD (liquid crystal display) Digital readout.  These meters are available in different units, including mR/hr, or milli-Roentgens per hour (popular in the US and Israel), and µSv/hr, or micro-Sieverts per hour (popular in Canada and overseas ).

A typical Geiger counter consists of a Geiger-Mueller tube, a visual indicator or meter readout (analog or digital), and an audio indicator. Typically the audio indicator sounds a "click" for each radioactive particle detected. 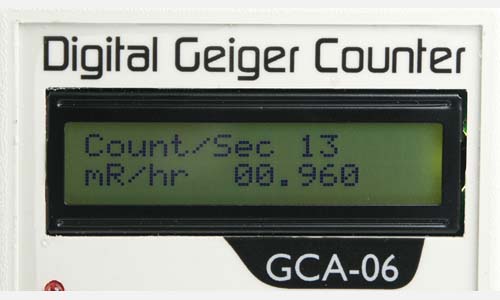 Digital Geiger counters not only offer visual digital readouts on an LCD display, but they typically also have audio ports for external speakers, as will as data ports for readout on computers and data loggers.


Each output pulse from the GM tube is a count. The counts per second give an approximation of the strength of the radiation field. The response curve of a GM tube shows the relationship between counts and radiation feild. It allows the manufacturer to get an approximation calibration using a cesium-137 source and response curve. See chart is shown in Figure 3. However true calibration requires that a geiger counter have an NRC certification to its accuracy.

Determining the type of radioactivity?