The lettering shown in the templates are large. You can reduce the size of the text 50% and still easily read the text, see figure 22. 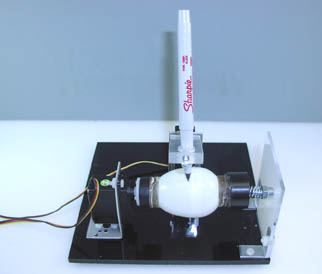 Other than text, graphic designs are also possible, like boxes, diamonds lines and rectangles. When you have an interesting design, you can have Sphere-Bot™ draw the design. When its finished, you can rotate the egg in its holder, and redraw the same design again, perhaps changing marker color between runs.


In most of my tests I used a fine point marker. You can also vary the width of the marker.


The height you set the marker in the pen holder also impacts the drawing of the design. Another variable you can work with.


Lifting pen between graphics and words. You can insert pauses within the script to allow you to lift the pen between words. Typically you insert a 15 second pause after the word. You lift pen. Servo’s move to new position and pause again for 15 seconds, to allow you time to lower pen, then continue.

When I build something I usually see ways to make improvements. This project is no exception. One could extend the back plate another inch or two away from the rotating servomotor. This will allow larger objects like light bulbs to be inserted into Sphere-Bot™. However this improvement also complicates setting up Sphere-Bot™ to write on eggs or other objects. The rotating servomotor could be changed to a larger HS-785HB that would allow full rotations. Another improvement I have given some though too is a Pen-Up mechanism.


If there is a positive response to Sphere-Bot™ I will redesign this bot and make improvements.