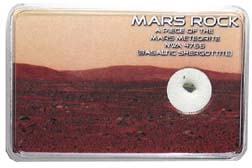 Though many meteorites have landed on earth only 34 have been identified as coming from Mars - making Martian meteorites very rare. According to analysis the meteorites are between 154 and 187 million years old and spent anywhere from 2.5 to 3.6 million years in space before succumbing to Earth's gravity. It is believed that this martian rock was ejected into space by another celestial body hitting mars; this event appears to have been around 16 million years ago. Each Martian Meteorite Sample ships in a plastic display case shown here.

Martian Meteorites vary in size, so the part of the picture shown at left may vary from product to product. We cannot guarantee that your Lunar rock will look exactly as pictured as here. It may be slightly bigger or slightly smaller.

For More Information on Martian Meteorites see this article