We’ve come a long way to gain an understanding of semi-conductors to see how they relate to making solar cells. A solar cell is essential a PN junction with a large surface area. The N-type material is kept thin to allow light to pass through to the PN junction.

Light travels in packets of energy called photons. The generation of electric current happens inside the depletion zone of the PN junction. The depletion region as explained previously with the diode is the area around the PN junction where the electrons from the N-type silicon, have diffused into the holes of the P-type material. When a photon of light is absorbed by one of these atoms in the N-Type silicon it will dislodge an electron, creating a free electron and a hole. The free electron and hole has sufficient energy to jump out of the depletion zone. If a wire is connected from the cathode (N-type silicon) to the anode (P-type silicon) electrons will flow through the wire. The electron is attracted to the positive charge of the P-type material and travels through the external load (meter) creating a flow of electric current. The hole created by the dislodged electron is attracted to the negative charge of N-type material and migrates to the back electrical contact. As the electron enters the P-type silicon from the back electrical contact it combines with the hole restoring the electrical neutrality.

A Light Emitting diode (LED) is very similar to the standard diode we already looked at. LED’s are made to emit light at the PN junction. When forward-biased the excited electrons from the N-type silicon combine with the holes in the P-Type silicone emit photons of light. Typically LED’s only emit one color of light. The manufacturer can adjust the frequency of the emitted light from an LED from infrared to ultraviolet. 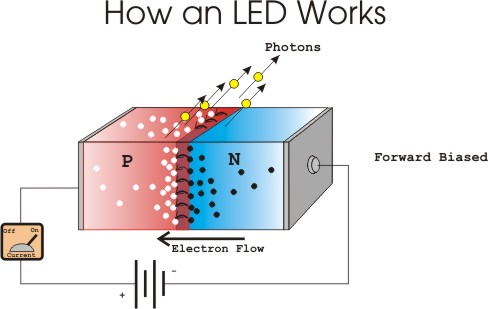 Using a bank of parallel LED's to generate electric power from light. 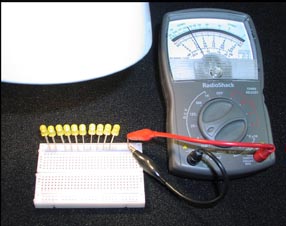 What is not commonly known is that most PN junctions are photovoltaic. While solar cells are made with a large area PN junction, a LED has only a small surface area in comparison. We can show the photovoltaic effect by wiring 10 LED’s in parallel. When exposed to sunlight, the LED’s will clearly generate electric current. See photograph. The ten LED’s will not generate as much electric power as a solar cell, but it does demonstrate the photovoltaic property of the PN junction.