The Sunflower is a passive solar device I designed that uses a Thermo-Electric Generator (TEG). It uses the heat from the sun, to heat the hot side of the TEG and cool ocean water to cool the opposite side see figure 6A.

The Styrofoam may degrade from the heat of the aluminum plate baking in the sun, but for the prototype, I’m checking function, not longevity or service.

Float the sunflower in ocean water and allow time for the top aluminum plate to get hot in the sunlight. Within a few minutes the TEG will begin to generate electric power.

To improve efficiency of the SunFlower, see figure 6C, you can increase heat capture by covering the black aluminum plate with glass, with a 2 inch dead air space, like in a flattened solar oven or solar water heater. This would reduce heat loss from the black plate to the air and wind making the Sunflower far more efficient.

Figure 7 is a photograph of the prototype sunflower under construction. This figure shows the heat sink and the TEG attached to the aluminum bottom side of the Aluminum plate.

Figure 8 shows the Styrofoam glued to the bottom surface. 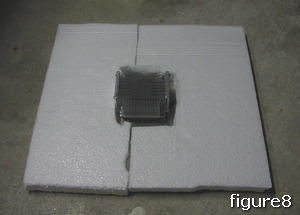 Figure 9 shows the top side of the proto-type with the two electric power wires from the TEG module. 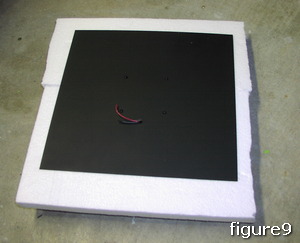 My prototype uses rectangle piece of aluminum, as this was easier to purchase than round shaped aluminum.

I am waiting for summer to test my prototype. I’ll post the results on my company’s website. www.imagesco.com. 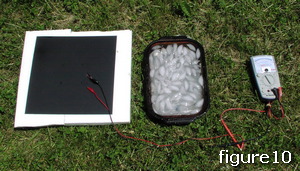 May 2010 wasn’t a particular sunny or hot month in NYC. I did have a few 80 degree plus days to bring the sunflower out for some preliminary real world testing. In place of an ocean I had to use a cooking pan filled with ice water, see figure 10. You may question the use of ice in the testing water. Without the ice, the water volume in the pan is so small that I was worried it would have reached ambient outside temperature (80+ F) before the tests could be complete.

I placed the sunflower’s heat sink into the pan of water and left it in the sun for fifteen minutes, see figure 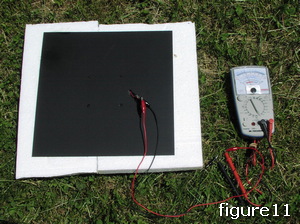 11, before I began taking some power output measurements from the TEG module. 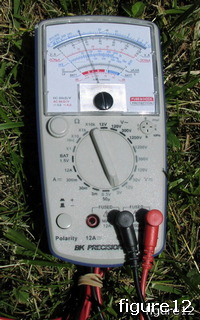 The voltage output at 15 minutes was approximately 0.8 volts, see figure 12. At the half hour mark I checked the current output. It was an impressive 160mA, far more current than I had expected.